How Much Will Ford's Core Business Moderate? Ford is undergoing a change in priorities as they look to get ahead of several upcoming technological changes in the industry, including electrification and autonomous vehicles. In May, the board showed just how serious they were about the shift by appointing Jim Hackett, the chairman of Ford Smart Mobility, as CEO of Ford Motor Company.

While the shift was widely discussed among investors and the media, investors remain primarily concerned about the core of the business. Year-to-date, the stock has gradually drifted downward by over 10% on concerns that the company has reached peak earnings, primarily driven by a moderation in the U.S. Recall that the U.S. segment represents the majority of the company’s total pretax income (>85%).

Concerns start at the industry level, where analysts believe that North America auto sales are likely to plateau given the stage of the industry cycle. According to third party industry estimates, July showed the seventh consecutive month of year-over-year declines and rising incentive spending.

Lagging Behind Peers in Recent Quarters Additionally, revision data from Visible Alpha shows that the 2017 estimate has moved down by 7% over the last year as the outlook has become more challenged. Source: Visible Alpha as of August 7, 2017. Want to see how estimates have changed over time? Access a variety of revisions charts like the one above by requesting a preview of Visible Alpha here.

Investors are concerned that lowered units could hurt profits given the importance of capacity utilization. 2Q results were also weighed down by rising steel costs. As a result, consensus North America pretax income and margin are expected to decline in 2017. And while estimates for 2018 are currently flattish from 2017, investors will be watching this closely to see if trends worsen throughout 2017. 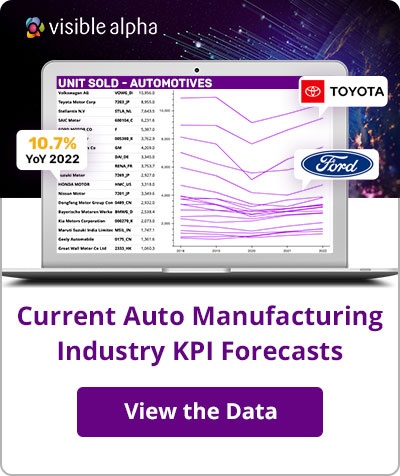