To say the last few years have been rocky in the oil and gas industry, specifically the exploration and production (E&P) sector, is an understatement.

The Covid-19 pandemic started the oil and gas industry on an uncertain path and changed how much of the world interacts with energy resources, but recovery comes with its own challenges. The fragility of the global supply chain is on regular display as small delays in one sector prove capable of creating bottlenecks that ripple around the world. Finally, Russia’s invasion of Ukraine is driving oil and gas prices up as the international community reacts with sanctions on Russia and seeks other sources to satisfy its energy needs.

Russia's energy exports account for almost half the country’s foreign earnings. According to the International Energy Agency, Russia joins Saudi Arabia and the United States as one of the top three global producers of crude; “Russia relies heavily on revenues from oil and natural gas, which in 2021 made up 45% of Russia’s federal budget.”

Sanctions on Russian industry are causing sharp declines in Russian exports overall, but oil and gas sanctions present a unique dilemma for the European Union and other countries heavily reliant on Russian oil and gas. So, while unreservedly condemning Russian aggression against Ukraine, many European countries can’t enact total sanctions.

As the U.S. bans all imports of Russian oil, liquefied natural gas, and coal, its European allies are adopting a more measured approach. The European Commission plans “to diversify gas supplies and speed up the rollout of renewable gases, which it said could reduce EU demand for Russian gas by two-thirds before the end of the year.”

With U.S. oil and gas sanctions in place, and more coming from the EU, domestic and international markets are factoring reduced global supply into their pricing models, causing energy prices to spike, and increasing inflation in the consumer price index. And with their costs essentially fixed, the industry’s major players are predicted to rake in record profits.

In a controversial, and according to some, largely futile effort to bring prices down, the U.S. Department of the Interior is making more federal land available for onshore oil and gas leases — at increased royalty rates designed to be “more in line with the higher rates charged by most private landowners and major oil- and gas-producing states.” Oil company executives, testifying before Congress in April, countered accusations of price gouging with calls for increasing oil and natural gas supply.

Meanwhile, the pandemic, supply chain upset, labor shortages, and inflation — combined with reduced supply because of Russia’s invasion of Ukraine — will continue to contribute to soaring market and consumer prices in upstream oil and gas.

E&P: By the numbers In realized prices for natural gas, analysts predict Shell (NYSE:SHEL) will buck industry trends to show substantial improvement, with forecasts up 26.9% year over year, versus a modest 12% increase predicted for Total (NYSE:TTE), and ConocoPhillips coming in relatively low with its 1.4% predicted increase. Analysts forecast increases in the low to modest range for other major players, with Chevron (NYSE:CVX) up 7.2%, BP (NYSE:BP) up 6.9%, and Eni (NYSE:E) up a mere 2.2%. Compare this to negative year-over-year numbers in 2020 and significant increases for 2021, which range from Chevron’s 47.3% increase on the low end to Total’s 121.1% boost on the high end.

Gazprom, Russia’s majority state-owned energy giant, looks likely to remain the world’s leader in natural gas production volume, though whether it will realize the profits of this production remains to be seen. For the supermajors, analyst forecasts show slight movement up (e.g., TTE, COP, BP, and E) or down (e.g., SHEL, XOM, and CVX) year over year. For oil equivalent production volume, six of the seven supermajors are forecast for slight to modest year-over-year increases, with Shell predicted to show a 4.4% decrease. The Russia-Ukraine conflict adds to existing supply challenges. High demand, reduced supply, and E&P costs that remain largely fixed add up to higher oil and gas prices. And while prices haven’t yet skyrocketed, as they did in 2021, market prices are still climbing year over year, which adds up to record revenue forecasts for the oil and gas industry.

Integrated Energy Companies: To be an early mover or a fast follower? 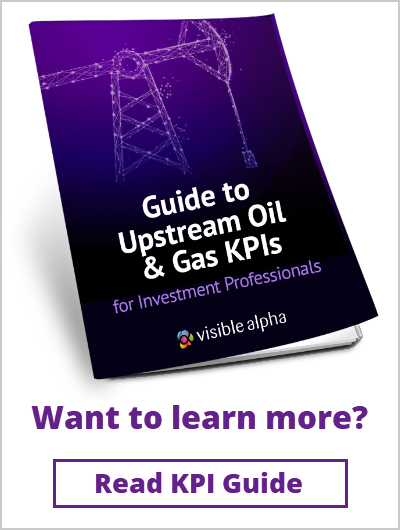